Our flock originates from Don’s family Registered Hampshire’s.  When we moved to the farm in 1978, the ewes he had earned while in school were returned to him.  Soon after, we chanced to come across a couple of natural colored ewe lambs, which of course the breeders would rather not recognize.  Being a spinner, Rhonda jumped at the chance at a foundation for a natural colored flock.  A couple years later, some colored Corriedale ewes and a ram made a significant addition to the number and fleece quality of the colored flock.

In 1980, with two small boys and a growing interest in wool related art, Rhonda made the ultimate sacrifice, and sold her horses.  The money was reinvested in a flock of purebred Corriedale ewes, and the wool trade began in earnest.

Over the years, the primary purpose of the flock was adjusted to meet the current demands, and varied from fleece, custom market and 4-H lambs, and general profitable farm flock purposes.  The natural colored flock diminished and finally, reluctantly, disappeared.  In 2008, wool production was reestablished as a priority with the purchase of a group of Polypay ewes.

As the primary focus of the flock shifted to the production of wool for the spinning and hand craft trade, additional changes were made. In 2009 a Corriedale ram and a black NCWGA registered ram became the foundation Sires. Their influence was apparent with the lamb crop in the spring of 2010 with 8 colored lambs, and improvement in fleece quality and quantity of the white ewe lambs, many of which were kept for replacement ewes. In 2011, a second Colored stud ram was added. The next crop of lambs are sired by all 3, and each bloodline is made contributions to the overall quality of the wool and flock.

With a growing market for the finer grade fleeces, and Rhonda’s preference for the same, the flock continues to be managed for wool quality. In 2013, a Merino ram came to join the flock. The ewe lambs kept as replacements will be shorn soon (in March of 2015) and we are excited to see the fleeces.

Despite the size and outward appearance of the small family business, Ewe and Us (formerly known as Provident Sheep and Wool) has always been run as a commercial enterprise.  In keeping with family farm tradition, everyone is expected to earn their keep, including the sheep.

The breeding flock has been selected and bred for practical traits for more than 30 years.  The initial purebred flock was kept for a number of years, until economic factors swung the culling gate toward practicality.  A loosely comprised scoring system developed.  Ewes earned points awarded for quality, quantity, and color of fleece and lamb production.  Ewes are expected to lamb on their own or with a minimum of assistance.  Milk production, mothering ability, and thriftiness are expected.  Mothers are required to raise at least one lamb to weaning weight, and preferably 2 or more. (The flock birth average is around 180 %.)  Points are lost for poor mothering (i.e. tail biting), weak lambs, difficult birth, or bad udders, as well as flock behavior problems such as fence jumping.  It may sound harsh, but the pencil is the bottom line, and those who conform lead a long life of green pastures and still waters.

Lambs are shipped when they reach market weight, around 120 lbs. They are generally sold direct to slaughter.  That’s the purpose. Our sheep are a for profit enterprise. They are not pets.  Our philosophy from the beginning has been clear.  To keep it in focus, our policy is you never eat anything with a name. That’s why our sheep only have numbers. (Well, except for a select few – namely the colored and distinctly unique)

While we are not organic, chemical use on both the flock and the land is avoided as much as possible.  However, the health of the animals is directly related to productivity, so common sense veterinary medicine and preventive practices are used as necessary.

Conservation practices are the norm. Throughout the season, limited grazing is on a rotational basis.  The farm is divided into several small plots, and grazing is limited by time, which is fully adequate for a ruminant.  In dry years, hay may be supplemented for short periods while the pastures recover.  Most years, little purchased forage is used from late April until late October. Additional forage is ‘recycled’ to the flock from garden and yard waste, (i.e. all those giant zucchini), lawn clippings, kitchen peelings and the like.  You’d be surprised at how much it adds up, and the ewes REALLY  LOVE those windfall apples in the fall. 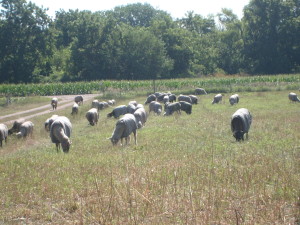 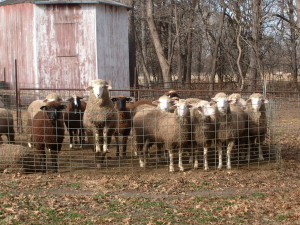 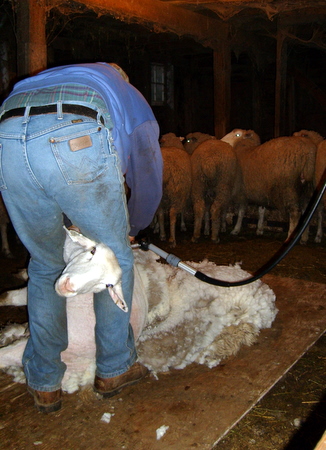