The McClure’s have always been gardeners.  Even before they ‘settled’ on the farm.  Just after they were married, the proceeds from the sale of a horse was re-invested in another – this time a shiny red ‘Horse’ model Troy built tiller.  Borrowed and rented ground supported the first years of the family garden.

Rhonda’s college degree is actually in horticulture.  The summer the farm was purchased, some tomato plants were the first to be moved, and the first residents, even before the humans. From then on, the large garden plot has been a seasonal workplace for the family from planting to harvest.  Countless quarts and bushels and buckets have been filled, emptied and replenished from the ½ acre lot.  Clearly visible from the road, it soon became known to the family that the summer garden had become somewhat of a local tourist attraction, with interested neighbors driving their visitors by for a glimpse of the sheep and the well manicured garden.  (Of course, there were also rumors of ‘those new sheep people’ in the neighborhood – they even shear and spin their own wool!) 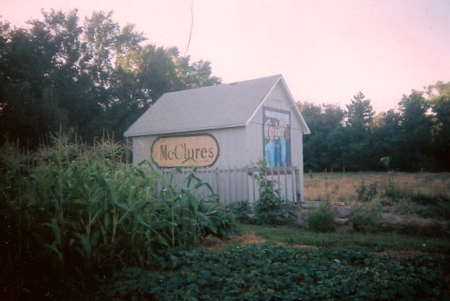 Conservation practices have always been a priority.  With an antiquated well as the only source of water, irrigation was nearly impossible.  Mulching was mandatory for any of the crops to make it through the hot and often dry Nebraska summers.  Water was reason enough, but weed control was perhaps the primary reason before long.  Experimentation was common.  Straw, grass clippings, newspaper, no till methods, and other innovations were tested over the years with varying success.  Finally use of commercial landscaping fabric weighted with a generous layer of straw was agreed upon as the most efficient means of managing to mulch nearly the entire garden area.  Put down as soon as the plants are established and the soil is warmed, both water and weeds are controlled through the summer.  Late in the fall, the straw is rolled off the fabric strips and the ground is tilled for the winter.  Much of the straw is burned off or tilled in as a questionably effective method of controlling the #1 garden menaces – the squash bug. (Which is also the reason organic is not a reasonable consideration.  The insects in this part of the country are resistant to anything but a boot heel.) 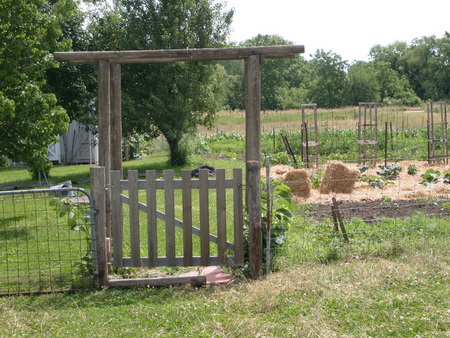 Despite the occasional infestations and natural disasters (wind and hail for the most part) over time a considerable collection of plant material and species has been established.  Apricots, 3 varieties of grapes, raspberries, strawberries, and rhubarb provide makings for canning, deserts, and an abundance of jam. (which are then shared  as gifts). From 2009 our abundant apple crop was still providing lunch apples from the storage in the garage in March of 2010. The pears were not as plentiful, but some made it into jars along with many of the apples. 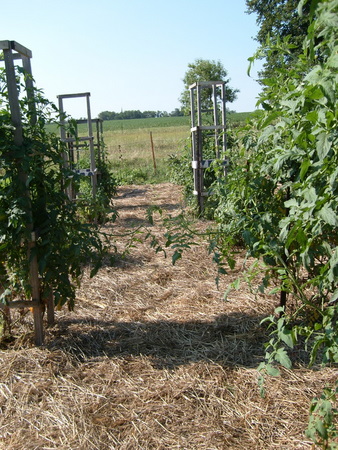 The vegetable garden has always been a major source of the family food supply.  The choice of its residents has changed slightly over the years with the family’s tastes and quantity demands. Selections were added, changed, and abandoned depending on success or failure, or just a lack of interest.  The core staples remained for the most part, and the ultimate measure of any given season is measured by the number – of jars lining the shelves in the fruit room, and bags neatly stacked in the freezer. 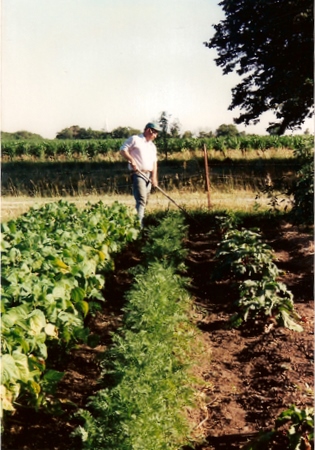 The selection of table pickings on a summers day changes as produce comes into season, but is selected from the following:

While the kids were eating at home, it was my goal every summer to have a minimum of 50 quarts each of beans and tomatoes, and 25 pints of carrots and beets safely tucked away in their jars.  Now that it’s just the two of us, more emphasis is placed on variety rather than quantity, and the quart jars are more likely to be reserved for the apples and pears. Smaller quantities find themselves in the freezer or packed for long term storage in the spare garage refrigerator.

What we grow, we eat.  Except for what we give away.  Don’s passion and pride are his melons, and they have become an annual event.  At the peak of the cantaloupe season, it is custom that we load the little blue Nissan truck with boxes and bags of melons and make a run through the neighborhood.  A neighbor at home is likely to result in a single stop for that evening, as for some it is our only real chance to visit.  No one at home means a quick stop, and a box left on the doorstop.  No need to leave a note.  They all know where it came from.

And so it Grows-

Then in the summer of 2010, a change was made. We realized that even though all the extra veggies were not really going to waste, there were probably people in our area who needed them more. So we signed up and were certified for the USDA certificate program, packed up our ‘extra’ produce, and took it to the local farmers market in Wahoo. While maybe not a get rich event, it was rewarding to see the tomatoes and melons and cucumbers being placed into eager hands. We continue to participate in 2012,with an expanded line of produce, home made jams, baked goods, and occasionally some craft items. The additional acres purchased now include the ‘annex’ garden, which nearly doubles the space, and room for sweet corn, pumpkins, squash, and ornamental corn and gourds for the Farmers Market.

While on a spiritual retreat many years ago, Rhonda was introduced to the labyrinth.  Immediately attracted to the ancient practice, it wasn’t long until she knew she had to have one available, and that meant finding space and means.  The space was the former play area of the yard, and the means was the lawn mower.  The resulting Santa Rosa Labyrinth remains today, and has been a curiosity to visitors.  It may not be walked as much these days, but it retains an air of sacred ground, and just maintaining it provides a sense of a deeper connection with the universe. 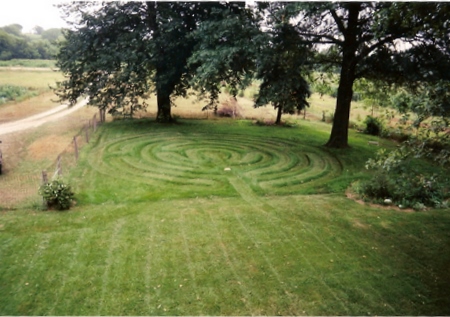